Kappa Delta Pi (KDP) is an International Honor Society in Education which was founded by William Bagley, Truman Kelly, and Thomas Edgar Musselman in 1911 at the University of Illinois. The organization was created to foster excellence in education and promote fellowship among those dedicated to teaching. The founders chose the name from the Greek words for knowledge, duty, and power. Today, the organization is comprised of more than 45,000 members. The mission of Kappa Delta Pi is to sustain an honored community of diverse educators by promoting excellence and advancing scholarship, leadership, and service.

The Installation and Initiation Ceremony for the Alpha Iota Alpha chapter of Kappa Delta Pi at Governors State University (GSU) took place on Tuesday, October 10th, 2017. This ceremony established the chapter at GSU and initiated its first group of active members. Dr. Amy Schroeder from the University of St. Francis represented Kappa Delta Pi and served as the inaugurating officer. Those who were invited to be a member of Kappa Delta Pi were required to meet certain criteria.  Invitations were sent to students and faculty in the College of Education, College of Arts and Sciences, and College of Health and Human Services.  Almost 40 students were inducted at this ceremony; over 30 other members were inducted but were unable to attend this event.  More than 15 faculty were initiated as first-time members; a few faculty who were already members, like Dr. Glenna Howell and Dr. Quincy Martin, were reinitiated into this chapter at GSU.

The executive officers were initiated as members and into their new positions in the chapter: Jessica Dunahoo, Stephanie Henning, Jessica White, and Michelle Westergaard.  The faculty advisors (Dr. Katy Hisrich, Dr. Marlon Cummings, and Dr. Timothy Harrington) were previously inducted into Kappa Delta Pi in their college chapters; they were reinitiated into this chapter.  As members, the faculty advisors assisted with the traditions of this ceremony.  Dean Dermer, a new member of Kappa Delta Pi, spoke at this event.  Dr. Deborah Bordelon, a long-time member and supporter of Kappa Delta Pi, served as the honorary speaker for the ceremony.

Ms. Marie Iofallo, a career educator, was presented with an honorary membership. She is the oldest inducted member of Kappa Delta Pi. Ms. Iofallo served as Principal of the Siboney American Defense School prior to teaching fifth grade Art in Park Forest’s Sauk Trail school in 1956. While at Park Forest, Ms. Iofallo developed a Gifted Program that was implemented in all seven District 163 schools. In 1990, Ms. Iofallo helped start the Tall Grass Art School. She is active with the Illinois Philharmonic Orchestra, the Illinois Theatre Center acting lessons program, the Center for Performing Arts and College of Education advisory boards at Governors State University. She is also a “friend” of the Steger-South Chicago Heights Library where she teaches Art classes. Ms. Iofallo was inducted into the Hall of Fame at Park Forest Historical Society in 2012.

Congratulations to all members of the new Alpha Iota Alpha Chapter of Kappa Delta Pi at Governors State University. You should be proud of your hard work and accomplishments. Kappa Delta Pi cannot wait to see you at future events throughout the semester. 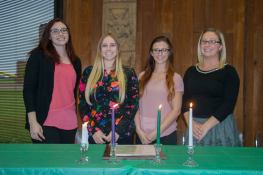